[Disclaimer: because this is a blog entry, which means it’s my opinion, my feelings, and my experience, please proceed with caution. I can get mean, stray away from the topic, or say something inappropriate.]

Hey, my rock and metal friends. I’m sure you know how daunting some shows get when you have to seat (or stand, or even get smashed upon) through two or three bands you never heard of or care about to see the headliner. The struggle is real, my fellow concert-goers.

For me that’s usually the case half the times I go to see or photograph a show. The openers don’t always suck, sometimes they are just mismatched, or don’t sound as good as they would have during their own headline show. Sometimes, it’s just politics, folks.

This was my first time I was actually really upset about not making it on time to be able to see the opening act Bad Wolves. Everything that could possibly go wrong this past Friday did. Sprinkle this string of bad luck with the case of the Friday afternoon traffic in SoCal. And that’s how you get yourself into a pickle – hearing the last lines of Bad Wolves’ ‘Zombie’ cover mixed with the roars of the crowd while trying to figure out the parking nightmare at the venue you’ve never been too. But that’s where the negative experience I had with this particular show ends. If you are a photographer or a press rep, some venues really treat you like crap (especially if they are union or in Downtown L.A. – don’t ask me why, but most Downtown venues think they are the sh*t when in reality they are just really old venue packed by ill-attitude employees).

Everyone working at this particular venue – a brand new 12,000 capacity spot called Five Point Amphitheater – was very nice. Many times, the security who handle the pit during ‘heavier’ shows are not being fair to the guys shooting the show. I was genuinely surprised that this wasn’t the case here. Imagine my awe, when we were explained that if a security would accidentally step on us or push us, they apologized in advance. Ya’ll know how the pit gets when people start crowd surfing. I seriously hope this wasn’t a one-time experience and the venue will keep up good attitude toward working folks.

Things you need to know about this band; they kick ass live.

I first heard of them via YouTube. The screenshot of the ‘This Is The Time’ video popped out from the rest of the videos in my recommends. Till this day I call that video a music-video-porn. It’s a thrill to watch. Imagine seeing the guys killing it on stage. The buzz is real. I think the 3 Grammy nominations are well-deserved. I wish Nothing More luck and hope they do get a Grammy someday. They are full of raw energy and whatever you, folks, hear, on a CD, is masterfully copied on stage. We all know, not many modern rock acts can match up to their studio version. Nothing More definitely can and some more. Highly recommended.

Nothing More’s The Stories We Tell Ourselves  is out now on Better Noise Records.

Multi-platinum band Breaking Benjamin has a huge diehard fan base, both through their chart-topping music, as well as their electrifying live performances. Their latest album, ‘EMBER’, released in April 2018 debuted at #3 on Billboard’s Top 200 chart and has so far featured two successful singles, ‘Red Cold River’ (peaking at #1 on Active Rock and giving the band their 8th #1 single), and the band’s latest single, ‘Torn In Two’ (steadily climbing the charts from its current position of #12 at Active Rock).

You can stream the new album Ember here. 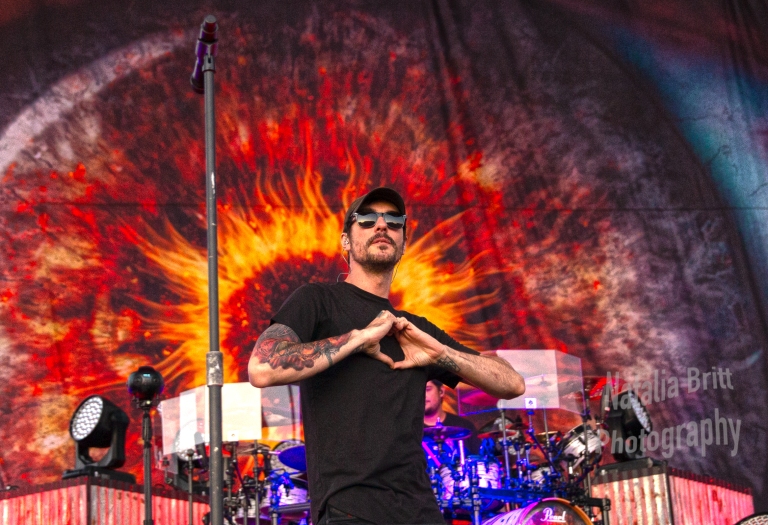 I’ve been a secret fan of Breaking Benjamin music for a few years now. I’m one of those people who might be reading too much into the lyrical content of the songs I listen to, but knowing some of the struggles the main man Benjamin Burnley has been facing throughout his life, I can’t help myself. Honestly, BB music has been a great source of inspiration for me personally. Besides, they didn’t disappoint live. Not at all. The only flaw in their setlist was the lack of my personal favorites like ‘Dear Agony’ and ‘Hollow.’ But we did get to hear ‘Angels Fall.’ The new singles from ‘Ember’ sound great live. It’s a shame, though, that the best song off their latest album ‘The Dark Of You’ didn’t make the cut. It’s a hauntingly beautiful and profound composition that gives the new album that unforgettable Breaking Benjamin feel. Always a hidden power gem among the abundance of the heavier songs. But given the fact that the whole package for the night was on a heavier side, I think the songs picked were banging and kept the crowd entertained. That included covers of Pantera, Nirvana, and Metallica. Those, who will be watching cell phone and cheap camera recordings of the medley on YouTube — don’t even… The guys did all those songs justice and no recording device will ever compare to a real-life concert experience. As a frequent concert goer, I can guarantee you that. As for Five Finger Death Punch… Honestly, I’ve been wanting to see them live for a while now. I like heavy music. I like to headbang, forget about my problems, and enjoy myself, and 5FDP music is definitely is great medicine.

But don’t let the crazy costumes and over-the-top attitude scare you. What most music lovers will appreciate is a diversity of their repertoire. The guys can definitely kick some ass with their faster songs like ‘Burn MF’ or ‘Lift Me Up’ (Still waiting for Rob Halford to crash one of the live shows, preferably when I’m there), but their ballads like ‘Wrong Side Of Heaven’ and ‘Remember Everything’ definitely tug on your heartstrings, especially if Ivan Moody start pulling out kids from the crowd to join him on stage for a little acoustic. 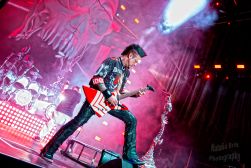 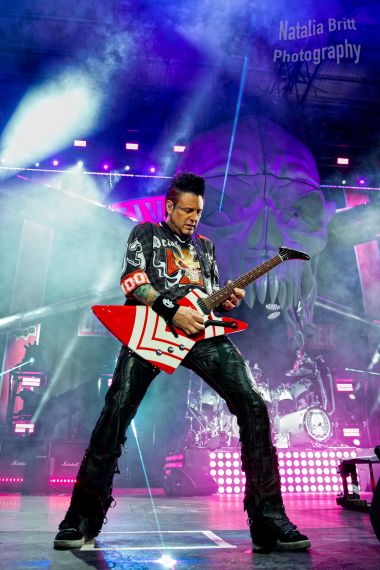 Five Finger Death Punch’s AND JUSTICE FOR NONE (released via Prospect Records), has sold over 100,000 albums and generated 100 million U.S. on-demand streams and over 250,000 US digital song sales. Fueled new single and video for “Sham Pain,” currently#7 at Active Rock and the Top 5rock song “Gone Away,”AND JUSTICE FOR NONE marked the group’s fifth consecutive Top 5 album release. The album also had four #1 placements on other charts including: Top Digital Albums, Top Rock Albums, Top Hard Music Albums and AND JUSTICE FOR NONEis the #1 streaming Hard Rock/Heavy Metal Album of 2018. Produced by the band and Kevin Churko (Ozzy Osbourne, Disturbed) with And Justice For None, Five Finger Death Punch has once again stepped up their game maintaining their signature intensity, all while pushing themselves into new territories. Purchase And Justice For None or stream the album here: https://fivefingerdeathpunch.com.

Fans purchasing a ticket to the tour this summer will also support a good cause. The co-headliners each will donate $0.50 from every ticket sold to two charity organizations close to their hearts. Five Finger Death Punch has chosen  C.O.P.S –Concerns Of Police Survivors, an organization whose mission is rebuilding shattered lives of survivors and co-workers affected by line of duty deaths, through partnerships with law enforcement and the community. Breaking Benjamin has chosen Prevent Child Abuse America to help counteract the abuse and neglect of our nation’s children by promoting services that improve child well-being and developing programs that help to prevent all types of abuse and neglect.

All images appearing in Natalia Britt Photography website are property of Natalia Britt and are protected under the United States and International Copyright laws. The images may not be reproduced, copied, transmitted or manipulated without the written permission of Natalia Britt.
Loading Comments...
%d bloggers like this: